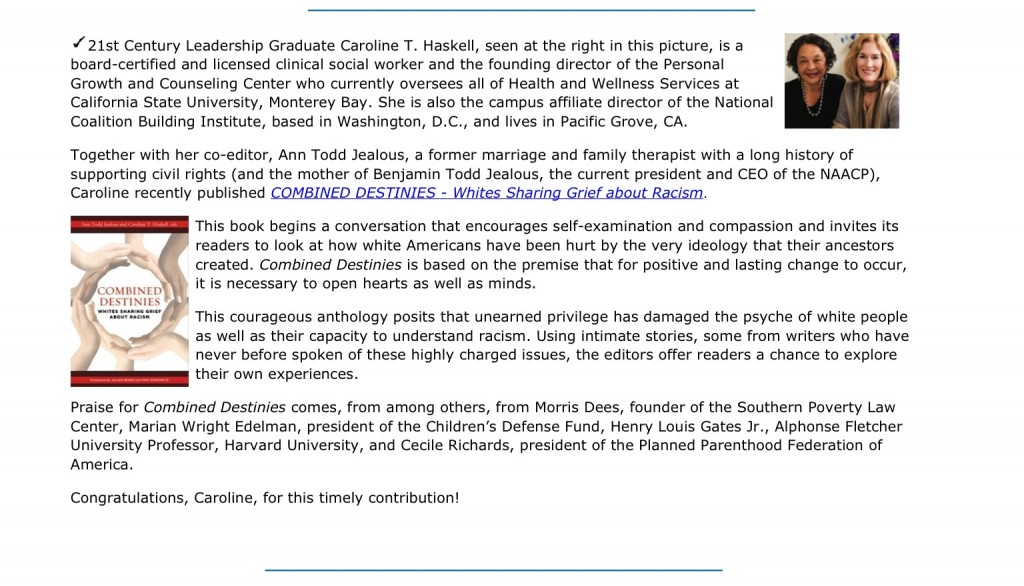 21st Century Leadership Graduate Caroline T. Haskell, seen at the right in this picture, is a board-certified and licensed clinical social worker and the founding director of the Personal Growth and Counseling Center who currently oversees all of Health and Wellness Services at California State University, Monterey Bay. She is also the campus affiliate director of the National Coalition Building Institute, based in Washington, D.C., and lives in Pacific Grove, CA.

Together with her co-editor, Ann Todd Jealous, a former marriage and family therapist with a long history of supporting civil rights (and the mother of Benjamin Todd Jealous, the current president and CEO of the NAACP), Caroline recently published COMBINED DESTINIES – Whites Sharing Grief about Racism.

This book begins a conversation that encourages self-examination and compassion and invites its readers to look at how white Americans have been hurt by the very ideology that their ancestors created. Combined Destinies is based on the premise that for positive and lasting change to occur, it is necessary to open hearts as well as minds.

This courageous anthology posits that unearned privilege has damaged the psyche of white people as well as their capacity to understand racism. Using intimate stories, some from writers who have never before spoken of these highly charged issues, the editors offer readers a chance to explore their own experiences.

Congratulations, Caroline, for this timely contribution!

This site uses Akismet to reduce spam. Learn how your comment data is processed.

On January 27th, Caroline and Ann co-facilitated a discussion of Combined Destinies with a group of Returned Peace Corps Volunteers, most of whom are involved in creating a national Peace Corps museum.

Get Your Book Today

On June 4, 2020, Ann was a guest on Learn More at 4,  a podcast for educators that is sponsored by the Maryland State Education Association of NEA.   The conversation was facilitated by Cheryl Bost, Director of MSEA and included Benjamin Jealous, CEO of PFAW and  Merwyn Scott, Racial Justice Director for NEA.   Their segment follows an interview of Senator Chris Van Hollen of Maryland and is app. 40 minutes into the program.

“Son of the South” on Amazon Prime - an excerpt from  The Wrong Side of Murder Creek - an episode of the dramatic life of Bob Zellner, one of the contributors to our anthology.